Paula Rego Behind The Scenes 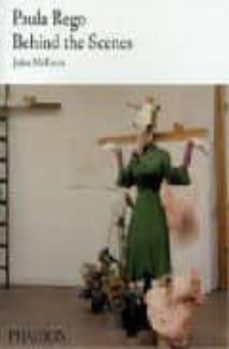 Paula Rego (born in Lisbon, Portugal, 1935) is one of the most important figurative painters working today and this new volume is the first ever to explore her working practice. When Paula took on her own studio in 1994, the increased space and freedom had a dramatic impact not only on her final works but also on her preparations, models, method and technique. Not only was the artist free to begin using a regular cast of live models, but also she began to create the handmade models of wild and imaginary creatures that frequently appear in her work. The pieces are sometimes made by Paula but more often by her friends and family, including her son-in-law, the sculptor Ron Mueck. In addition to unseen views of the stage sets and models that Paula builds, this new book contains many previously unpublished images of the artist at work, her models and her preparatory drawings and studies, which provide a fascinating behind-the-scenes view of some of her finest works.Since 1994 Rego has also achieved ever more increasing international respect, reputation and influence. This new book will demonstrate her methods and techniques, but will also maintain an accessible and anecdotal text, as befits the artist's dependence on stories. The book is not so much a technical manual, but an investigation of how Rego arrives at a finished work. It will serve as a complement to the existing monograph, offering readers the chance to deepen their knowledge of Rego's art through the plots she devises and the collaborations she enters into with her favorite models, the props she collects and the elaborate scenes that she erects. In so doing it will also show her affinity with younger artists who have in recent years achieved international success by adopting a figurative and story-based approach in a variety of art forms - installation, video, photography, sculpture and painting.Rego's work is owned by many international institutions including, among many others, Tate Modern, London; National Portrait Gallery, London; Leeds City Art Gallery; Kemper Museum of Contemporary Art, Kansas City; New Hall Art Collection, University of Cambridge; Saatchi Gallery, London.Paula Rego was short listed for the Turner Prize in 1989.

Dame Maria Paula Figueiroa Rego DBE RA (born 26 January 1935) is a Portuguese-born visual artist who is particularly known for her paintings and prints based on storybooks. Rego's style has evolved from abstract towards representational, and she has favoured pastels over oils for much of her career. Her work often reflects feminism, coloured by folk-themes from her native Portugal.