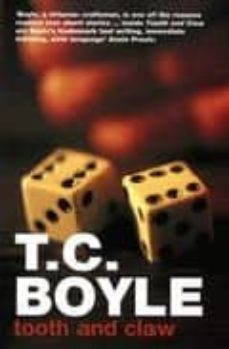 While there is a bit of mythology in the script (the name Torchwood is mentioned once again), Tooth and Claw works perfectly as a self-contained story with hints of John Landis, most explicitly in a wonderful scene where the Doctor and Rose, while hiding from the wolf, giddily express their excitement about the situation.

This new collection of short stories from T. C. Boyle finds him at his mercurial best. Inventive, wickedly funny, sometimes disturbing, these are stories about drop-outs, deadbeats and kooks. Take the man who shares his apartment with a wildcat won in a drunken bet; the drive-time shock jock hallucinating from sleep deprivation for a publicity stunt; the suburban woman who joins a pack of dogs, eating rabbits and baying at the moon. With a unique deftness of touch and a keen eye for the telling detail, Boyle has mapped the strange underworld of America.

Tooth and Claw, a combo bar and animal story, gives us a lost young man trying to cope with a feral pet. In Blinded by the Light, a Patagonian rancher is afflicted by the visit of an environmental doomsayer obsessed by the ozone hole over the South Pole.